Looks like the project i've been working on the last months has finally been announced!
here you have AMALA'S BLADE, with words by Steve Horton & art by me!

Cant wait for you all to this comic full of Steam-punk assassins and Cyborg-pirates! 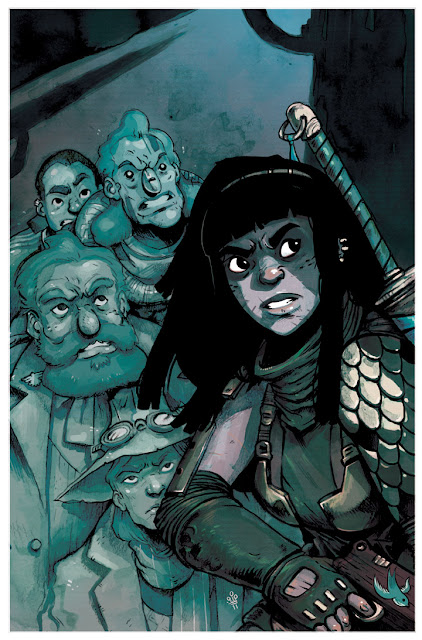 Amala was once chosen as a child to be the spiritual leader for her country, to unite the Purifiers and Modifiers and prevent war. She fled into the night. Twenty years of war later, she makes a living as an assassin, but her past is ever ready to catch up to her. Aboard a massive pirate ship, Amala stalks the fearsome pirate captain Cha'Kooh ... but the voices in her head, manifesting as ghosts, keep getting in the way!
Amala’s Blade will be featured in issues #9, #10 & #11 of Dark Horse Presents.
"Amala’s Blade is the steam punk-with-swords epic that I've been dying to tell," says Steve Horton, writer and letterer. "Thanks to the extraordinary and talented artist Michael Dialynas, we've brought Amala to life. Thanks to Dark Horse Comics, we've found an amazing and supportive publisher for our three-issue run in Dark Horse Presents. This story has heart, sword fighting, sarcasm, revenge, pirates, technologically modified villains, a girl steam punk heroine, and a robotic pirate monkey. What more do you need?" says Horton.
Dark Horse Presents #9 is out February 22nd, 2012!